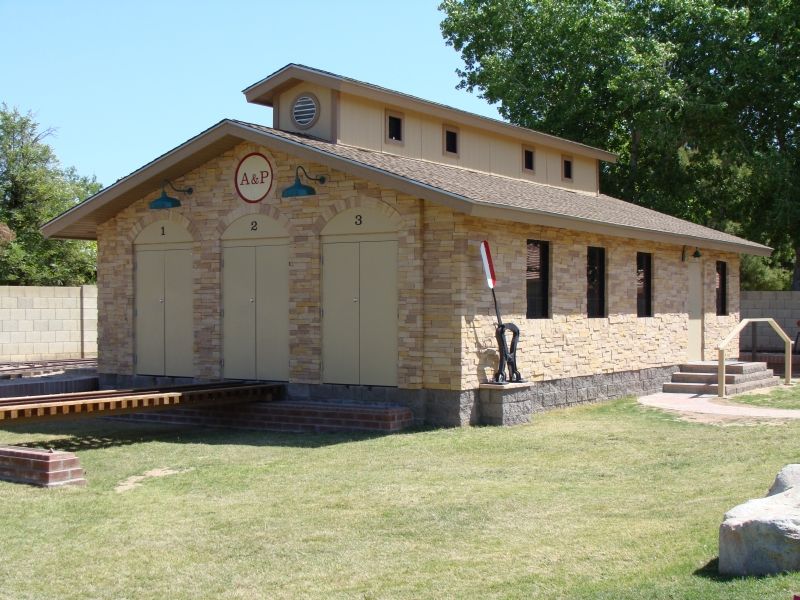 Our turntable, water tank, transfer table and trestle no. 5 get lots of attention and comments, but the stone engine house is the signature structure on the Arizona and Pacific Railroad. I knew I wanted a stone exterior reminiscent of the depot in Blackhawk, Colorado and the engine house at the Alpine Tunnel also in Colorado. I also knew I wanted a clerestory roof to allow in additional light and to have the look and feel I was looking for in our engine house. In the fall of 2005, I approached my architect with photos of the Redwood Valley Railroad car barn, the Hillcrest and Wahtoke Railroad car barn and several rough sketches that I had done showing what I was looking to build.

It saved me a great deal of money by me not being in a hurry and he fit me in between his large commercial projects. There were a few versions, but the final drawings were presented to me in June of 2006. I applied for the building permit on July 25, 2006. The city made me jump through all kinds of hoops as planning and zoning couldn’t understand why I wanted to build a railroad engine house on my property if I wasn’t going to operate a commercial railroad business here. I should have just called the building a “garage”. Finally, after almost five months of red tape, they approved the plans and issued the initial permit which was just the shell of the building really and did not include any electrical.

When I started looking for a house in midyear 1991, I was looking for a property with at least an acre of land, irrigation water rights, no HOA and the land and house configured in such a way that I could have a small railroad on the property. I envisioned a much more modest little railroad than we ended up building. After I purchased the property in February of 1992, I started envisioning where the tracks and engine house would someday be located. After meeting Malcolm Mackey and visiting his Flagstaff and Middle Verde Railroad, my ideas for location of the different elements began to really take shape. In 1995, we purchased our first engine and shortly thereafter started work on our mainline in the back yard. I confirmed all of the setback requirements with the City and laid things out on paper as to where the track and structures would be. We started building the elevated roadbed and laid out where the trestles would be located. The engine house would be ten feet from the rear property line and ten feet from the side property line.

Over the eleven years that passed between when we laid things out and when I pulled the construction permit, the ordinance had changed. The closest you could build to the rear property line was now twenty feet which changed a number of things. If I retained the idea of a three way switch into the engine house at its new location, I would have had to remove several trees that I had planted. I designed the transfer table and it accesses the engine house; the trees stayed.

The building was constructed in four phases: 1) the original building shell, 2) electrical and epoxy floor finish, 3) exterior stone work and large signs and 4) insulation and the tongue and groove ceiling. We broke ground on the first phase in January of 2007.

I don’t remember how many tons of steel went into the foundation and floor, but it was a substantial number. Steel I-beams and hundreds of feet of flatbar and angle iron support the rail and kept them in place during the floor pour. Add the steel rails and all of the rebar tying everything together with eight inches of concrete and the floor is pretty solid. It is much more solid than my driveway and the floor in the garage attached to my house.

We poured the footer, but had the floor poured and the roof constructed by subcontractors; the walls, windows and doors were done by friends and I.

I wanted to add stone to the exterior of the concrete blocks during this part of the process, but was denied by planning and zoning as it was inconsistent with the rear of the house. We passed our final inspection on Dec. 11, 2007 and obtained our certificate of occupancy.

As soon as the certificate of occupancy was issued, I started on the exterior stone work as I found out I didn’t need planning and zoning to approve it after a certificate of occupancy was issued. The stone is all real and individually cut one at a time to fit. Several friends and I spent every Saturday and Sunday for months cutting and applying the stone. We were all so happy to finally be finished with that part of this project, but it is that work that really sets the building off from others.

This was a pay as you go project and we took a little break and I saved some money before buying the R38 insulation for the ceiling in September of 2009. We finished installing the insulation in April of 2010. We started on the tongue and groove ceiling in February of 2011 with sanding and staining of the wood. We completed the ceiling in May of 2011 and added the custom designed vent covers in November of that year. Shelving and displays were added in steps during the following months. The interior walls may get wainscoting one day, but for now we will call it complete.

The rear waiting area patio adjacent to the engine house was originally built in December of 2007. We tripled its size with a March of 2010 expansion and added to it again in August of 2014.

The engine house itself was completed just over five years after we broke ground and more than six years after I initially took photos and drawings to my architect. It is 1000 square feet and seemed huge when first completed; now I wish it was twice as deep. It captures exactly the look and feel of a Colorado narrow gauge railroad which is exactly what I wanted for the Arizona and Pacific Railroad.


Back to A&P RR Contruction Articles