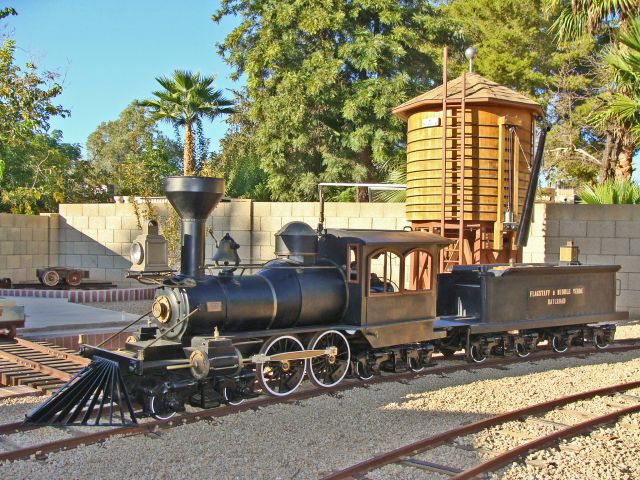 
History of the Flagstaff and Middle Verde Railroad Engine #1 Tucson

The arrival and operation of the new Allan Herschell S-16 at the Hiway House Hotel in Phoenix proved an immediate success in October 1959. In November of that year, Del Webb ordered another S-16, this one (builders number 60-1875), to be installed at his HiWay House Hotel and convention center in Tucson, Arizona. The train was shipped from the Allan Herschell plant in North Tonawanda, New York on January 15, 1960.

The hotel, located Oracle Road in Tucson had a brief run (59-65) when it competed very successfully for the local conventions and traveler. The track was a modified loop within the large grass courtyard where it paralleled the swimming pool and barbeque grills and then wound its way through the parking lot where it passed the coffee shop and registration office.

Interest in the hotel began to wane after the completion of the interstate highway through Tucson routed traffic several blocks to the west and Webb sold the hotel in 1965. It changed hands at least twice before 1974 (Travelodge and Hilton). Despite the changes in property ownership, the train and the track remained on the hotel property. It is unclear when the train last operated, but it was years prior to 1974.

In September of 1974, the Hilton Inn had decided to remove the train and tracks and add several tennis courts. Malcolm Mackey became aware of the hotel’s plans and quickly contacted ownership and consummated a deal for the train, the rail that didn’t run through the parking lot and the crossing signals. With a great deal of help from family and friends, the railroad was disassembled and removed from the hotel grounds later in September and moved to Flagstaff, Arizona where it was stored for many years.

Malcolm completely disassembled and rebuilt the engine and tender when time permitted over several years. She once again moved under her own power, on Malcolm’s F & MV Railroad in Camp Verde, Arizona on October 23, 1988 as F & MV No. 1.

She ran on the F & MV from October 1988 until August of 2012. The nearly twenty-four years of operation at that location far exceeded her fourteen years at the original location in Tucson. She now operates on the A & P RR in Peoria, AZ as the “Tucson”.

We would love to have additional photographs that might exist of this engine when she was in operation at the hotel in Tucson.